Originally, those who left for a pilgrimage did so exclusively for reasons of faith, Ad maiorem Dei gloriam, to obtain an indulgence, to fulfill a commitment resulting from obtaining a grace. The pilgrim set off accompanied by the declaration of the parish priest of his village, in which the quality of a good Christian and motivation for the trip was attested, and inviting people to give support and care to the traveler on his journey. Sometimes, it could happen that the noble lord of a place instructed his own servant to complete the route: the roads were not safe and dangerous encounters were habitual.
This document was called a credential and is one of the beautiful things that have remained into our days, even if the reasons for the trip may no longer be faith and the fulfillment of a religious commitment. This document certifies the identity of the pilgrim, the motivation that animates him and collects evidence of the journey, or the stamps of the places where he was received or where he passed. With which document to accompany the path proposed here?
This is an emblematic path of sharing, it starts from the Via Francigena, joins the Cammino di San Jacopo and then can continue on numerous other historical routes. We are convinced that any type of credential is welcome and we point out the most easily available ones: 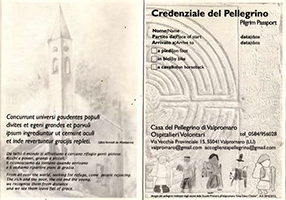 Valpromaro – The Valpromaro hostel has long had its own credential, issued to those who show up without one or intend to start the journey right there. So it is possible to have a credential, even if you started from Pietrasanta or Camaiore, the first stamp will be that of Valpromaro. The Committee has prepared a particular stamp dedicated to the celebration of the Jacobean year. 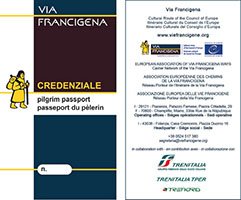 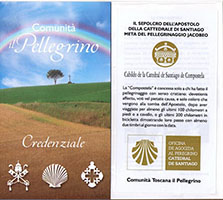 Comunità Toscana “Il Pellegrino” (www.comunitatoscanailpellegrino.org) – The credential can be sent by post and only the cost of shipping is requested and, at the discretion of the applicant, a possible donation to support the association’s activities. Here we can find the model for the request: https://www.ilcamminodisanjacopo.it/wp-content/uploads/2019/11/Richiesta-Credenziale-2019.pdf 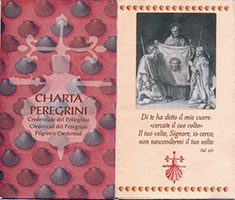 Confraternita di San Jacopo di Compostella (www.confraternitadisanjacopo.it) – issues the document directly to those who request it and who undertake to accept the meaning of a pilgrimage with a more markedly devotional and spiritual background. The Credential is delivered personally by the Regional Chapters of the Brotherhood. The Brotherhood Credential is designed to be used, as in fact, by those who also go to Santiago de Compostela, Rome, Jerusalem, Monte Sant’Angelo, Loreto, etc. No payment is required, although to make this service possible, the Brotherhood accepts an offer, to the extent decided by the applicant. Here we can find the model for the request: click here to download the .doc file
Confraternita di San Jacopo di Compostella – Via Ritorta, 22 – 06123 Perugia – tel / fax 075.5736381, cell. 371.3134272, correspondence address: Piazza IV novembre 6, 06123 Perugia – e-mail: centro.santiago@unipg.it 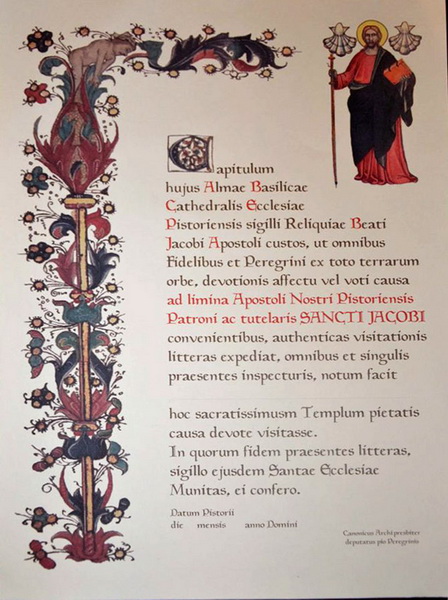 The Jacopea is the equivalent of the Spanish Compostela, and gives evidence of the completion of the pilgrimage, as it occurred in the past. Pilgrims shall apply to the Baptistery of San Giovanni in Corte, at Piazza Duomo in Pistoia by presenting their credential duly stamped as a proof they have walked at least 50 km. It can also be issued to anyone for which you have walked the Cammino, should he/she not have been able to walk it in person.
The “Jacopea” is the official document issued in Latin, stamped and completed with name, surname and date of arrival in Pistoia after walking the Cammino di San Jacopo in Tuscany. It attests that pilgrims have reached the Cathedral of Pistoia, AD LIMINA BEATI JACOBI. The document is printed on fine paper, manufactured in Pescia, and looks exactly as the “Compostela” issued in Santiago di Compostella, apart from text and picture of San Jacopo in the right top corner.
Opening hours of the Baptistery: 10 am to 1 pm; 3 pm to 5 pm daily.