THE PILGRIMAGE TO SANTIAGO DE COMPOSTELA

St. James
James, son of Zebedee, a fisherman, was one of the 12 apostles. After the resurrection of Christ for many years he toured the Iberian peninsula to carry out the work of evangelization. Back in Palestine he was beheaded by King Herod Agrippa, who feared that the apostle would acquire excessive power; his disciples collected his body and transported it secretly by ship to the places of preaching. Disembarked near Finisterre, they entered Galicia and buried him. In the following centuries, trace of the sepulcher was lost. In the year 813, the hermit Pelayo saw, for several days after, a shower of stars falling on a hill. One night St. James appeared to him in a dream who revealed to him that the place of lights indicated his tomb. The abbot removed the earth that had deposited over the centuries and discovered the tomb. From here began the cult of Santiago (the name is the contraction of San Giacomo). A small church was built on the site of the tomb; soon a city arose around it which was called Santiago de Compostela (from campus stellae).

The pilgrimage to Santiago de Compostela

The pilgrimage to Santiago was initially hampered by the presence of the Arabs in the Iberian Peninsula. Over time, the process of reconquest by the Spanish princes and kings made possible the flow of pilgrims which soon became impressive, thanks also to the propulsive action exercised by the popes of that time and the powerful order of the monks of Cluny.
Upon departure, the rite of dressing was performed with the delivery of the saddlebag. The pilgrim on departure stripped of his possessions and often had to sell or mortgage the goods in order to finance the journey. He made his will and gave orders for the management of the estate in his absence. Often the Church actively intervened in this function of protection. This singular state gave the pilgrim a particular prestige.
The choice to make a pilgrimage was generally a free personal decision: to ask for a grace, to fulfill a vow, for a personal religious search. However, in many cases it was imposed as a penalty by the judge or as a penance by the confessor for sins or sins of particular gravity. Those who were rich could send a person to make the pilgrimage on their own.
Pilgrims usually traveled in groups, to support and protect each other: the dangers were represented by the often precarious state of the roads, by natural disasters and above all by the bandits who infested the roads.

Services to pilgrims
Along the way a network of services for the sustenance of pilgrims developed: churches, monasteries, lodgings, hospices, hospitals, inns, many of which are still visible today. Along the way, towns and cities were born, roads and bridges were built. For a long time, many hospitable orders took care of the protection of pilgrims from the attacks of brigands: among them mainly the Templars (until their dissolution – 13th century). Many kings and famous people made the pilgrimage: St. Francis was one of them. 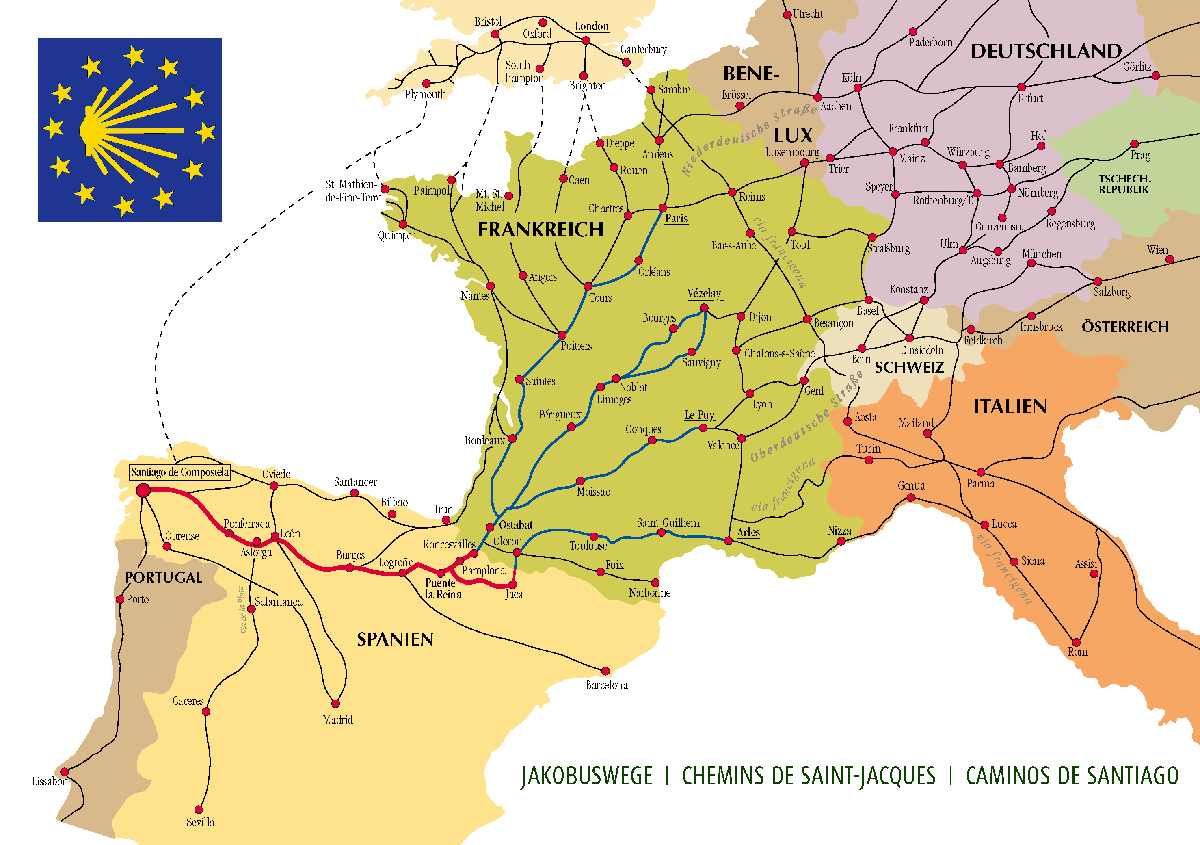 – one directed to Jerusalem – the pilgrims were called “palmieri” (overseas palms); the palm was also the symbol of pilgrimage.
– one directed to Rome – the pilgrims were called “romei” (from Rome); the symbol was the cross.
– one directed to Santiago – were the “pilgrims” proper (the farthest, most pilgrim place); the symbol was the shell.
In fact, the great guidelines of the three great pilgrimages of the Christian world consisted of:
– a set of routes that from continental and insular Europe crossed present-day France on several routes, converged at Roncesvalles and Puente la Reina, to head to Santiago de Compostela
– another set of streets which, coming from various European locations, joined the Via Francigena as far as Rome
– those who went to the Holy Land continued along the ancient Appian Way to the Apulian ports. This same route was used, in the opposite direction, by pilgrims who, leaving Italy for Santiago, crossed the Alps and entered the Via Tolosana.

Decay and rebirth
The pilgrimage to Santiago had eriods of greater or lesser participation. It was supported and promoted above all by the most enlightened and evangelical component of the Church. In the eighteenth century a progressive decline began. Most of the reception facilities fell into neglect; others changed their intended use.
The recovery began in the 1980s. A decisive contribution was made by the visit of Pope John Paul II to Santiago in 1989, in conjunction with the world youth meeting: half a million young people gathered in Santiago from all over the world, and it was the largest concentration of pilgrims. never recorded. Since then, the flow of pilgrims has increased progressively and unstoppably. On 23 October 1987, the Council of Europe declared the routes leading to Santiago “European cultural itinerary”, making available economic resources to conveniently mark the way, renovate and build shelters to house pilgrims; in 1993 UNESCO declared them a “World Heritage Site”.
The Via Francigena also obtained in 1994 the certification of “Cultural Route of the Council of Europe”