Every community of ancient origins, small or large, carries with it the signs of its own vitality. In the life of a rural town like Valpromaro, in profound transformation since the postwar period, the traditions linked to country life and spirituality represent the most identifying and significant permanence. Signs and rituals with which the entire local community has identified for generations, and which today are the reason for a different vitality that is no less significant and full of interesting aspects. 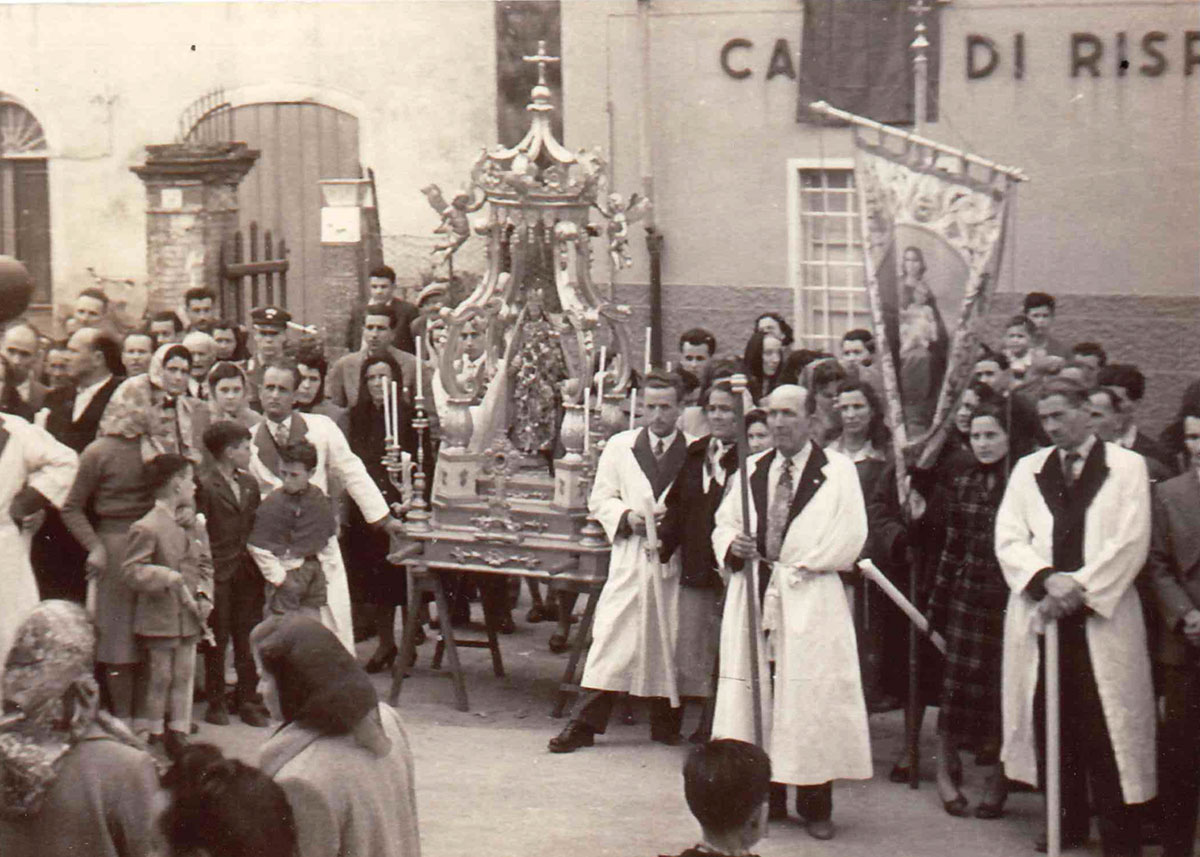 The Madonnina dei Miracoli – The community of Valpromaro celebrates with great devotion two rituals in which Mary, Mother of Jesus is the protagonist. The first is of Lucchese origin and concerns the Madonna dei Miracoli who, together with the Holy Face and Santa Zita, has always represented one of the three most important rituals of the Lucca faith. The story starts in Lucca, March 29, 1588. It is said that a young soldier placed to guard the Porta dei Borghi (one of the three gates in the medieval walls circling the city), while he was embroiled in a game of dice, he broke out in a blasphemy against the Madonna, and immediately his arm broke. In the room where the dice game was being played, a small image of the Virgin was frescoed on a wall. This image immediately became an object of collective veneration and a destination for pilgrimages. The religious ferment and the news of miracles performed by the image prompted the state magistrates to order its transfer to the Church of San Pietro Maggiore. The fervor must have been really significant given that the sources refer to the constitution of one of the most important Confraternities in the city dedicated to the Madonna dei Miracoli. In the short space of a few years it was also decided to assign the title to the new gate just built along the new Renaissance city walls. The church of San Pietro Maggiore soon became known as the church of the Madonna dei Miracoli.
The fortune of the cult waned with the suppression of religious bodies carried out during the Baciocchesco principality, that is the time in which Napoleon’s sister, Elisa Bonaparte Baciocchi ruled in Lucca from 1805 until 1815, which also caused the destruction of the Church of San Pietro Maggiore . The image at the time was transferred to the fourth altar on the right of the Church of San Romano, from which it was mysteriously stolen in the 1990s. The devotion to the cult of the Madonna dei Miracoli is celebrated today on the first Sunday after Easter, in Valpromaro and Borgo a Mozzano, where the Madonna called dei Ferri is the patron saint of the Municipality. In the village, until the 1960s, the Festa della Madonnina was the big party. The village could not contain the people who arrived on Monday for the celebration. Thus many of the neighboring villages followed the procession from the hills facing the church, then bare and now covered with woods. On this occasion it was traditional to show up with new clothes which locally is called the Incigno feast. It was an occasion of confirmation of the centuries-old Marian devotion, but also of joy, the moment in which the stuffed cakes were made and eaten, the houses were filled with invited relatives and acquaintances. Family, religious and social aspects were intertwined with each other. 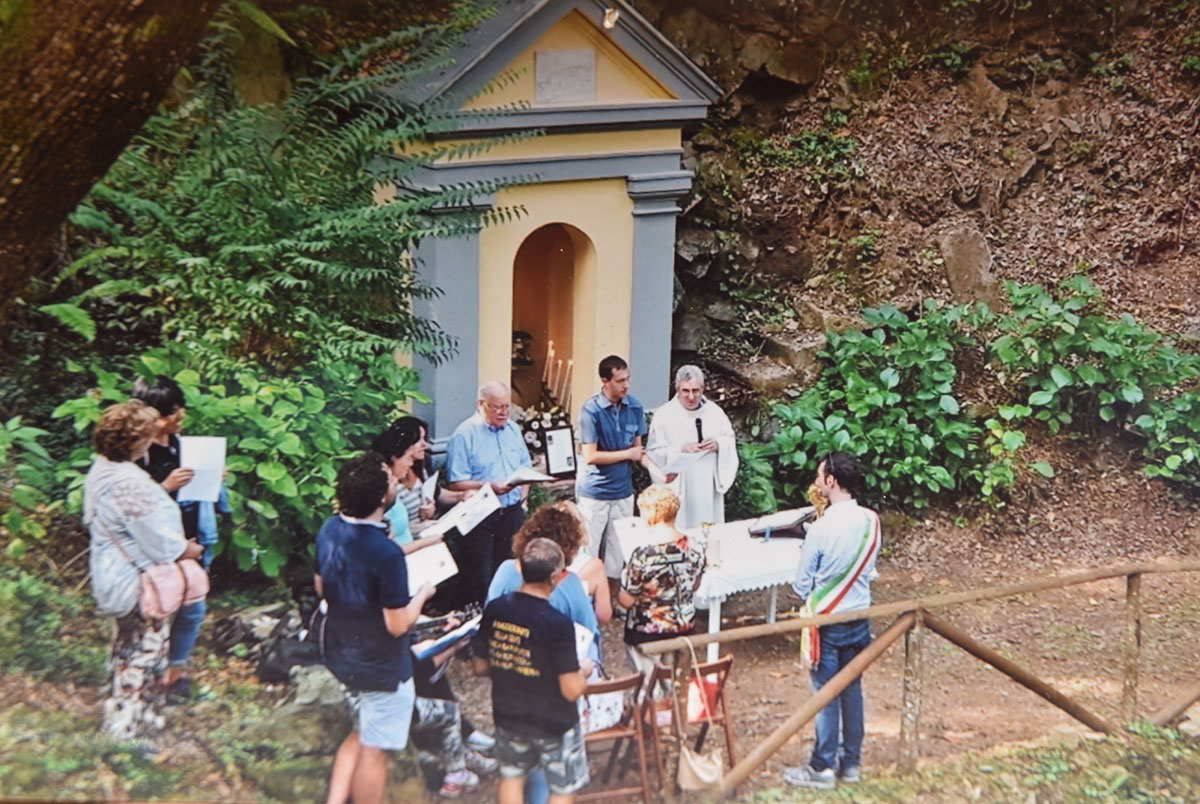 La Madonnina del Canale – The small village of Valpromaro originated from families dedicated to agriculture who were very devoted to the Madonna; the experience in some ways mystical-religious lived by Don Albino Moretti, curate of Valpromaro from March 1902 to September 1904 was grafted onto this cult. At that time the village had about 350 inhabitants and was experiencing a moment of development and economic growth linked to commercial and entrepreneurial activities that were favored by the street and was becoming the reference center of neighboring countries. It began to be what today, with a little regret, the elderly remember the “capital” of the Six Miles.
Only by resorting to fragmentary oral testimonies, as well as the story made by Giuseppe Bertacchi in an old publication on the town, it is possible to understand the origin of the small sanctuary along the Renipoli Canal: Don Albino curate of Valpromaro, noble figure of priest and apostle of Christ, while he was walking through the shady paths that walk along the edge of the Renipoli canal with some of his boys… he saw some caves, half hidden between hedges and brushwood. Nearby, the group stopped for breakfast … At the end, Don Albino placed a small statue of the Madonna, which he had brought with him, at the entrance to a cave. The rosary was said in front of the statue. When after a few days the group of boys and the priest went back to pray at the foot of the statuette they found a light on. Soon many, individually or led by Don Albino, went to pray in front of the small image. The inhabitants of Valpromaro had a statue of the Madonna sculpted in a Pietrasantino sculpture workshop, which had to be solemnly carried in procession to replace the small one carried by Don Albino. But the Bishop of Lucca forbade the ceremony to take place, pushed by the parish priests of neighboring towns, sorry to see their churches deserted during the afternoon functions on public holidays, due to the influx of people on the banks of the Renipoli.
Then the Valpromaresi, unable to solemnly carry their Madonnina on the Renipoli canal, silently brought it to us ”. Later the statue of the Madonna was placed in a chapel built under the rocky spur where it was placed for the first time and on September 8, when the Nativity of Mary is remembered, it ended up becoming the feast day of the Madonnina del Canale. During the Second World War, particularly in the summer of 1944, most of the inhabitants of the country and some families of displaced people took refuge in makeshift shelters along the Renipoli Canal.
The area in front of the Chapel of the Madonna became a meeting point where many gathered to pray or attend the masses that were celebrated there. At the foot of the Madonna there were many photos of soldiers at the front, for whom the protection of the Virgin was invoked. After a period in which the festival took place in a minor tone, in recent years, by the will of the inhabitants it has been relaunched, moved to the Sunday closest to 8 September to encourage greater popular participation and alongside the religious part a series of others initiatives. 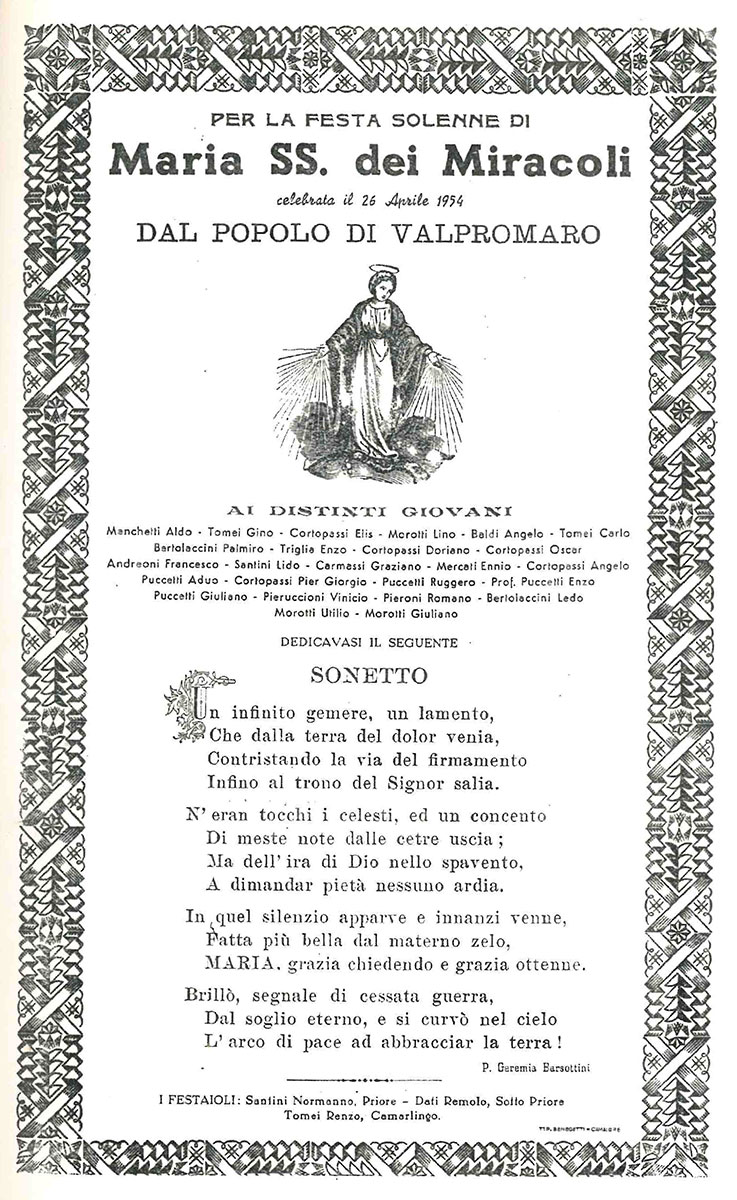 The Sonnets – The term “sonnet” refers to a poem, typical above all of Italian literature, whose name derives from the Provençal sonet. In its usual form the sonnet is a fourteen-line poem written in iambic pentameter, employing one of several rhyme schemes, and adhering to a tightly structured thematic organization.
In the area of Lucca, popular tradition identifies in the sonnet not only a poetic genre, but something with its own physicality, a silk or paper square, on which a rhyming poem is printed, linked to religious events or parish celebrations.
From the second half of the nineteenth century and until a few decades ago, this particular and significant expression of popular religiosity was integral to the most important religious celebrations. In particular in Valpromaro – for the Feast of Our Lady of Miracles, the first Monday after Easter – it was traditional to have “Sonnets” and “Santini” printed. Organizing the celebrations were the “revelers” who also had the task of soliciting offers, necessary, among other things, for the printing of a sonnet. Some families, especially the wealthiest, felt it was an obligation to commission it, thus confirming their social role and importance in the country; however, no one wanted to stay behind and be outdone. A silk flap and the printed poetic composition meant much more than a devotional act and an expression of affection for the recipient: they represented an important moment in family life to be exhibited in a picture hanging on the walls of the living room.
The writing was made up of three parts: the presentation, the dedication and the actual composition. Also indicated were the revelers or the committee of the celebrations and the typography that had taken care of the printing. As far as Valpromaro was concerned, most of the sonnets were commissioned from the Benedetti Printing House in Camaiore, which had acquired great fame in this field from the second half of the nineteenth century.
The sonnet had a presentation that was a prerequisite to every other element, in it was indicated the “owner” or the cause of the feast, the place and date of performance. As for the dedications, they could be the most varied, with expressions that are now obsolete and make us smile: we were addressing children, young ladies, engaged couples, groups of young people, spouses, emigrants, soldiers.
The poems could also be of a different kind. And there were many possibilities: odes, hymns or common religious songs, simple prayers, passages in prose, from classical literature or taken from the Liturgy. In the texts one could perceive the effort to adapt a profane literary genre to religious themes, using materials of classical derivation, coming from the scholastic culture or from subsequent readings. The authors were often amateur poets, belonging to the ranks of stornellatori or rhyming improvisers, very frequent in the past in these areas, but it could have been the parish priest of the town or the preacher called for the occasion. Printing was done on fabric, usually silk. Sometimes cardboard was used as an alternative, in a small number of copies reserved for the family to which the sonnet was dedicated. Copies on paper in bright and showy colors were more numerous and the quantity varied according to the importance of the party, the client and the offers collected. The final result of the composition then depended on the skill of the typographer, in appropriately choosing the print font, the frame, the friezes and the sketch, combining everything so as not to give rise to out-of-tune. From a collection of these “minor documents”, it is possible to draw non-marginal sociological analyzes and considerations.