The origin of the cult of San Giacomo in the city of Pistoia has ancient roots: in the year 849, in view of a feared invasion by the Saracens who were already at the gates of Rome, the inhabitants of the city invoked the protection of the apostle, as they were you use to do in moments of despair. The city was spared and as thanks the Pistoians built, after some time, a small church near the Castellare, a fortress built in the first circle of the walls. The church of San Jacopo in Castellare was named, by the common people, San Jacopino. In 1784 it was used as the seat of a wool mill where poor girls housed in the nearby Leopoldine Schools worked. Few traces of the façade remain of the church on the sloping cobbled street called “sdrucciolo del Castellare”. 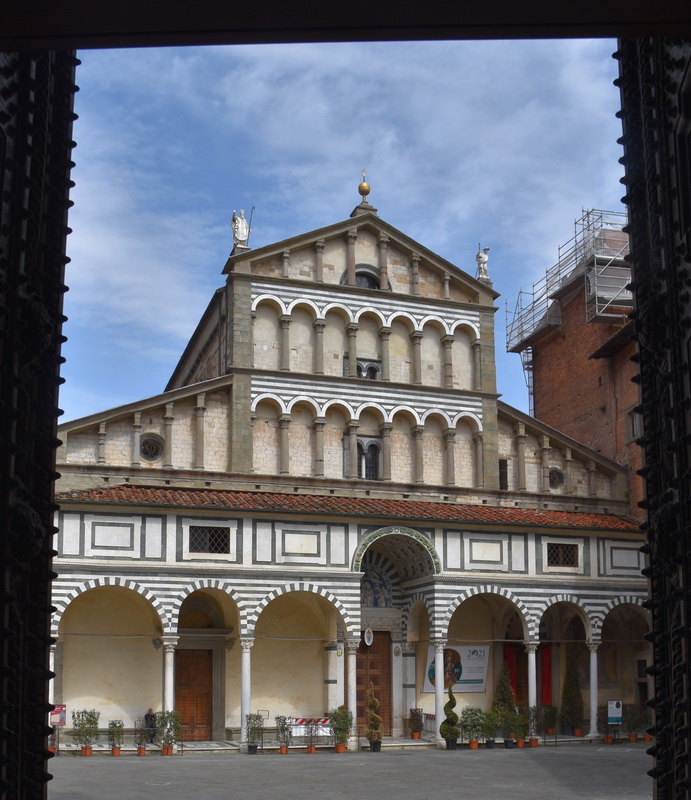 Historical sources tell that in 1113 a Spanish monk became bishop of the city, trained in the school of the Vallombrosian Congregation, who for his exemplary conduct, first as a simple monk and then as bishop, after his death was declared a saint with the name of Sant ‘Atto (or Attone). At that time the city was experiencing a complicated historical period: with the intention of reconciling the power of the Municipality with that of the Church, the holy man promoted the recovery of a relic of the Holy Apostle from the Great Cathedral of Santiago de Compostela, where found buried. In that city, a clergyman named Ranieri, a deacon of Pistoian origins, taught in the role of Scholae Magister. Through the intercession of these, the Bishop of Santiago Gelmirez allowed the sarcophagus that housed the body of the Apostle to be opened a little. A lock of hair was taken from the back of the skull with a piece of skin and a bone fragment.

Mediovillano and Tebaldo were the two noble Pistoian messengers who were entrusted with the task of bringing the precious find back to the city. They arrived there in July 1144, welcomed by great manifestations of devotion, thus starting the tradition of the Jacobean cult in Pistoia.

For the safekeeping of the relics, Bishop Atto arranged for the construction of a chapel inside the Cathedral of San Zeno and a silver altar. Pistoia became a destination for numerous pilgrimages with significant economic repercussions, as was the case in the bishop’s plans: the economic benefits made the union between the bishopric and the municipality more solid. In 1395, while Bishop Andrea Franchi was in force in Pistoia, Pope Boniface IX granted an indulgence to the Chapel of San Jacopo.

The Opera di San Jacopo originated from the administration of offerings and the organization of celebrations, both secular and religious, linked to the cult of the Saint. Ordinances of the people took care of the celebrations: the Cathedral was internally adorned with festoons of greenery, boxwood branches, laurels and roses. We proceeded to the presentation of the treasure, the prize was run, a fair and a gargantuan breakfast were organized. On the occasion of the celebrations it was customary to leave free some prisoners and distribute food to the poor. Outside, the cathedral was decorated with grape shoots and apple branches: “saiacopa grapes” and “saiacope apples” considered a gift from the Saint.

Traditional is the rite of dressing: a red cape is placed on the shoulders of the statue of the Apostle, placed on the right side of the facade of the Cathedral. Legend has it that St. James, before moving on to the spiritual life, was a horse broker and used to postpone payments to the hot season. Thus, despite being in the height of summer, a creditor who approached him to collect the saint presented himself wrapped in a red overcoat pretending to be very cold and postponing the payment “at hot season”. This is in fact today, a typical Pistoian term to indicate dishonest payers. The red mantle is also attributed the meaning of reconciliation between city and countryside, worlds often in conflict and again this color brings back to the fusion between the secular and religious world as the color of passion and martyrdom.

Today a notable secular attraction is the Giostra dell’Orso palio which takes place on 25 July, three days after the rite of dressing. It is an equestrian tournament between the four city districts that battle it out in a competition of skills in the enchanting Piazza del Duomo. In the past under the front porch of the Cathedral, to protect the faithful from the sun, a huge cloth painted in checkered and with shells of San Giacomo was spread. The tradition of the lavish breakfast that was served to the civic authorities, the bishop and the high prelates is no longer in use.

History has it that in the beginning fruit, bread, wine and berlingozzi, typical scones (tarallucci) flavored with anise, were served. Over the years it became the rule to offer sugared almonds, fennel (typical Tuscan salami, with a slight hint of Fennel) and refreshments of Trebbiano (the famous wine) and again, in the following centuries, jams, cialdoni (sweets scones particularly loved by Lorenzo the Magnificent , to which he dedicated a composition known as the “Canzona de ‘Cialdoni” pistachios, candied fruits, Greek wine, Malvasia and Trebbiano. The ritual took the name of Sugar Breakfast and was definitively terminated in 1777.

Recognition of the body by the relic 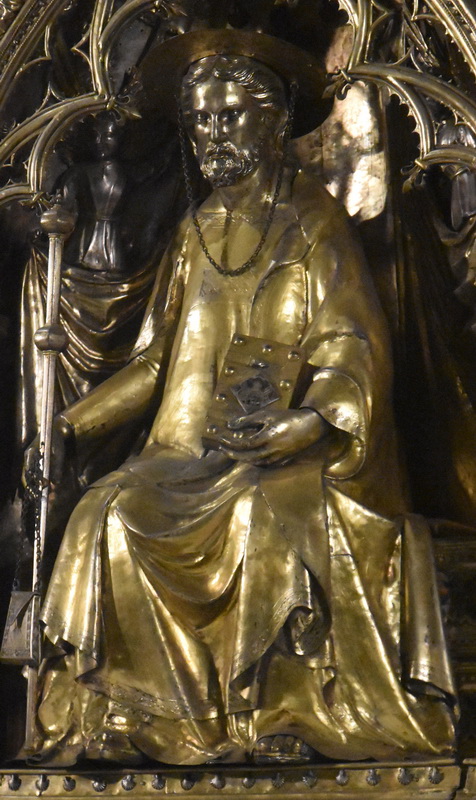 The relic of St. James kept in the Cathedral of Pistoia played an important role in relation to the tomb of the Apostle in Santiago. A story that deserves to be told.

After carrying out evangelization work in Galicia, James returned to Palestine where he was beheaded by order of Herod Agrippa in the year 44. It is legend that his disciples, with a boat, led by an angel, transported his body back to Galicia, to bury it in a wood near Iria Flavia, the most important Roman port in the area (today Padron). Persecutions and prohibitions to visit the place made people lose memory of the tomb until, in 813, the hermit Pelagius, forewarned by an angel, saw strange star-like lights on Mount Libredòn. The bishop Teodomiro, interested by the strange phenomenon, discovered in that place a tomb, probably from the Roman period, which contained three bodies, one of the three had a severed head and an inscription: “Here lies Jacobus, son of Zebedee and Salomé”. Subsequently the body was taken to Santiago, the Cathedral built and kept there. The removal of the relic now kept in Pistoia, by permission of the bishop of Santiago Gelmirez, takes place before July 1144, when Tebaldo and Mediovillano returned to Pistoia.

In Santiago, for various reasons, it became necessary to move the remains of the Apostle on several occasions. One of these was faced with the threat of pirates in the 16th century, when they tried to land in La Coruña. Faced with the danger of destruction and desecration of the Apostle’s tomb, a small cubicle was built at the back of the main altar where the remains were hidden, which thus disappeared for several years until the cubicle was discovered in 1884. As he recounts Don Luca, Archpriest of the Cathedral of San Zeno, the uncertainty about the identity of the body was resolved by verifying that the small parietal bone kept in Pistoia was missing from the skull.

There is no shortage of doubts that the remains are really of the apostle but they are certainly the ones from which the relic was taken in 1144.